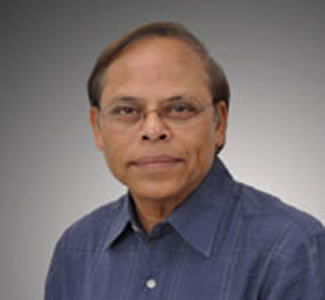 Research Emphasis: My laboratory is interested in studying molecular basis of inflammation-induced diseases and current research focuses on arthritis and cancer. Our goal is to discern new information on the molecular events that are responsible for the pathogenesis of these diseases and to use this knowledge to develop new approaches for effective treatment. Abnormal gene expression, which plays a critical role in the pathogenesis of these diseases, is a major target of our investigation. Activation of transcription factors by mechanisms involving signal transduction and epigenetic modulation of chromatin structure that influences assembly of regulatory proteins at the chromosomal genes are some of the crucial molecular events we have been investigating. Our studies have revealed the identity of a novel transcription factor called SAF, serum amyloid A activating factor. We have extensively studied several structural features of this protein which belongs to a family of at least four members that are derived from a single gene by alternative splicing mechanism. Activation of SAF by different signaling pathways involving MAP kinase, PKA, PKC and mTOR provides an opportunity to control its activity with different pharmacological agents. Abnormal activity of several transcription factors plays an important role in the angiogenesis in cancer and therefore, we investigate this event to develop novel control measures against cancer growth and metastasis. We also explore gene silencing approach with siRNA/shRNA technology to control abnormal gene activities associated with arthritis and cancer.

Ray, A. and Ray, B.K. (2008) An inflammation-responsive transcription factor in the pathophysiology of osteoarthritis. Biorheology 45: 399-409.